Supercar was a children's TV show produced by Gerry Anderson and Arthur Provis's AP Films for ATV and ITC Entertainment. 39 episodes were produced between 1961 and 1962, and it was Anderson's first half-hour series. In the UK it was seen on ITV and in the US in syndication. The format uses puppets in a technique called supermarionation, a name that was first seen in the closing titles of the last 13 episodes. The plot of the show consisted of Supercar, a vertical takeoff and landing craft invented by Rudolph Popkiss and Horatio Beaker, and piloted by Mike Mercury. On land it rode on a cushion of air rather than wheels. Jets in the rear allowed it to fly like a jet and retractable wings were incorporated in the back of the car. Retrorockets on the side of the car slowed the vehicle. The car used "Clear-Vu", which included an inside television monitor allowing the occupant to see through fog and smoke. The vehicle was housed in a laboratory and living facility at Black Rock, Nevada, U.S.A. In the show's first episode, "Rescue", the Supercar crew's first mission is to save the passengers of a downed private plane. Two of the rescued, young Jimmy Gibson and his pet monkey, Mitch, are invited to live at the facility and share in the adventures. 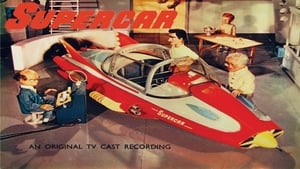